10 Campfire Games You Need To Play

I love campfires! They have a magical way of bringing people together, inviting them to laugh, sing, and tell secrets. The sparkling golden hues of the fire, the crackles of the wood popping, the bright constellations above, and the warmth of people gathered around a central focus… (And let’s not forget about this yummy S’mores!) So much of our life is spent moving in different directions, but the summertime campfire grabs you by the hand and asks you to sit and relax… together. Enjoy these ten campfire games you have to play… 1) Truth Or Dare
Back in 1712 a game was played in which a commander would bid his subjects to answer a question that was asked. If the subject refused, or failed to satisfy the commander with his response, he’d be forced to follow a command or have his face “smutted” (aka dirtied).

A few centuries later, Madonna made this game more popular than ever. These days, the game involves fewer smutted faces, but players are still given a question to answer. If they don’t want to answer it truthfully, they can perform a “dare.” The questions are usually embarrassing, and the dares can be equally so. After answering the question or completing the dare, that person asks “Truth or Dare?” to another player and the game continues. (Source)

2) Telephone
Telephone is a game played around the world in which one person whispers a short message to someone else. Easy peasy. The fun begins when that person quietly whispers the message to another person. This secret message is passed from one person to another until the last person announces it to the entire group. Thanks to the errors that usually arise in the retellings, hilarity usually ensues. An oldie but a goodie! (Source)

3) Twenty Questions
Twenty questions is a popular game that starts with one person selected to be an answerer. He or she chooses an object that is kept secret. Every one else is a questioner, and they take turns asking questions that can be answered with a “yes” or “no.” If appropriate, “maybe” is also an acceptable answer, but the answerer may not lie. A traditional questions could be something like, “Is it bigger than a breadbox.” Although who knows what a breadbox is these days, let alone how big one is? Perhaps another question could be, “Is it heavier than a davenport?” In any case, if the questioners can’t figure out the subject in 20 questions, the answerer wins and gets to remain in that role for the next round. If someone figures out the subject before the 20 questions have been asked, that person is declared the winner and takes on the esteemed role of answerer. (Source)

4) Make Me Laugh
This game has a simple premise: getting people to laugh while trying not to laugh yourself. Divide your group into two teams and decide which team is “on stage” first. Then choose one person from the opposing team to be on the “hot seat.” Set the timer for 2 minutes. The team that’s on stage has one simple goal: to make the person on the hot seat laugh.

Now laughs and smiles and giggles and snorts can be difficult to distinguish from one another, potentially creating some areas of disagreement, so we like this simple rule: if you show your teeth, you’re out!

The team can work together or individually, but they are not allowed to touch the other team, make fun of them, or be mean. When someone cracks, his or her team has to take their turn on stage. If the player can keep a straight face for the entire two minutes, he earns a point for his team.

5) Name That Tune
If you have a musician in your midst, Name That Tune can be fun. The game show that popularized it had a lot of rules and variations. For a campfire situation, a fun way to play is to just have the musician begin playing a song. The first person who can name the tune wins. Don’t have a musician in the house? Just use an MP3 player with mini speakers. Tip: this game works best when most of the players actually know the songs played. I remember watching the game show version as a child and it was filled with various waltzes. In a word: lame. (Source)

6) Two Truths and a Lie
Everyone in the group shares three facts about themselves. Here’s the catch: two of the things are true, but one is a complete farce. The other players have to try to guess which one is the lie. Now to make this fun, don’t say something like “I grew up in Brooklyn” if you really grew up in Queens. That’s not a big difference and nobody cares. Everybody has had experiences in their life that are borderline unbelievable. Use those. Stuff like, “I used to be a belly dancer.” “I went to grade school with Bill Gates.” “I wrestled an alligator.” The more creative you are, the more fun the game, and the closer you all become!

7) The Winking Assassin
A crisp dark evening around the glow of a campfire is a perfect setting for this game of death and deception. All of the players close their eyes except the one person predetermined to be dubbed the Godfather. The Godfather secretly taps one of the other players on the shoulder. This player becomes the “assassin.” He kills off other players one at a time by winking at them, although he must do it secretly, without others seeing him. As soon as someone is winked at, he or she must slump over and play dead. But if anyone witnesses the assassin winking and says, “he’s the winker!” the jig is up. But don’t be too quick to tattle; anyone who guesses wrong is immediately and metaphorically sent to swim with the fishes and is out of the game.

8) I Can Tap This Stick Just Right
I played this once in college and totally got hoodwinked till the very end. All you need is a stick to tap on the ground or your hand. The person in the know will subtly clear their throat and say the following while tapping the item: “I can tap this (stick, pencil, etc.) just right.”

They then pass the object to the next person to try to perform correctly. The original person acts as the judge, declaring if the tapping was done correctly. The trick is the clearing of the throat first – it does not actually matter how they tap the object.

It is a fun game because people will be watching the positioning of your fingers on the stick or how hard to tap it, and it takes a while for them to catch on to the clearing of your throat.

The game continues until everyone is in on the secret. When down to just a few people that just aren’t getting it, make the “ahem” louder and more obvious. (Source)

9) There Once Was a Skunk 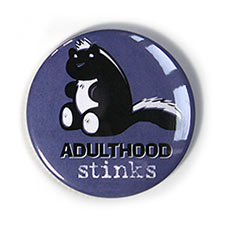 10) Guess the Jelly Bean (aka Jelly Bean Russian Roulette
For maximum effect, this game requires the Bean Boozled style of jelly beans made by Jelly Belly. (Fortunately, you can get them here.) These lovely candies feature flavors such as peach and pear and buttered popcorn, mixed in with other gems like canned dog food, moldy cheese, and booger. As you sit around the campfire, pass the box along the circle, with each player selecting one jelly bean, eating it, and trying to guess the flavor. If the person needs a hint, you can examine the back of the box for the color of the jelly bean you sampled. Of course you could use regular old jelly bean, but them the game wouldn’t be as disgusting (or fun!) (Source)